Being a creative person (or a person who creates), I usually have several projects going at once. Today, I managed to finish one, which is no small feet. The piece I finished today is a dark purple baby sweater with light purple rose buttons.

Before I go into what I did for this sweater, I’d like to give you a little background into the baby sweaters I make, and how I got into knitting in the fi 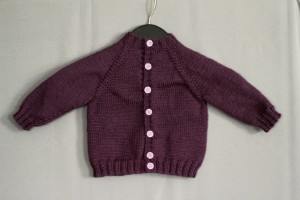 rst place. My mom taught me how to knit when I was around 10 years old. It was really just the basic knit stitch – I would always forget how to purl, and I never really learned how to cast-on. Fast forward 15 years: my friends were starting families, and I was flat broke. Through college and grad school, I had still been knitting – getting past the basics, but making mostly scarves. For Christmas, my mom gave me a knitting book by Elizabeth Zimmerman. In it was a pattern for a baby sweater. I made it and gave it to my friend Jennifer for her first-born. 5 or so sweaters later, I finally worked out most of my mistakes (and learned what ssk meant!), and had a pretty good handle on the pattern.  And I just kept making them. There were always babies being born, so there was always a use for them. It’s also a basic pattern, kind of a one-size-fits-all, so I was able to memorize it pretty quickly. For several years, the only changes I made where different size needles or yarn.

Recently, I’ve started adjusting, or changing the sizes, which is a little tricky. It’s tricky because I knit these sweaters in one piece. There are literally no seams for me to sew up. Weaving in the ends and sewing on buttons are my only finish work. That’s because a couple of years ago, I realized I’m great at starting projects, but horrible at finishing them. The fewer steps at the end, the better. The pattern I’ve used called for knitting the sleeves flat, then sewing them up. Now I knit them in the round with dp needles – which takes longer, but makes it easier for me to finish in the end. Last year, I found that I had 10 sweaters, without buttons. As much as I wanted to start another sweater, I had to sit down and sew on a lot of buttons.  (I might have figured out a way to knit the buttons on directly, which could solve all my problems!)

I’ve lost track of how many baby sweaters I’ve made over the years. I wouldn’t be surprised if it was as many as 50. But it’s my favorite thing when I get a photo in the mail (snail or “e”) of a little one wearing one of my sweaters.

For this sweater, I used a little over a skein of Caron Simply Soft Eco, which my sister Colleen got me for Christmas.  I took the idea of knitting without seams (from Elizabeth Zimmerman’s Knitter’s Almanac), with some shaping references to “Baby’s First Tatoo” by Delia Lam, but I may have made enough changes to note this as my own pattern.  I’ve had the buttons for awhile, left over from a stash of lavender yarn I made a few sweaters from.  I believe this sweater will fit a 1 year old, give or take a few months.

One thought on “Baby Sweater Without Seams – My First Original Pattern”